Uniting FPT and Practice since 2016

The winners of the 1st PACE competition were presented at ALGO 2016 in Aarhus. For those that couldn’t make it to Aarhus: here are the results. We would like to thank all participants for making this 1st edition of PACE an enjoyable and successful one.

The treewidth of a graph is an important graph parameter, the theory and complexity of which has been intensely study in graph minor theory and fixed-parameter tractability (FPT). Given a graph G and an integer k, it is NP-complete to determine whether the treewidth of G is at most k, but there is an n^(k+2)-time algorithm (Arnborg, Corneil, and Proskurowski 1987). The problem can also be solved in FPT-time exp(k^3) n (Bodlaender 1996), and a factor-5 approximation can be obtained in time exp(k) n (Bodlaender, Drange, Dregi, Fomin, Lokshtanov, and Pilipczuk 2013). It is unknown whether the problem has a polynomial-time approximation scheme (PTAS).

Treewidth implementations are used in various contexts. For example, compilers allocate registers by computing proper colorings on control flow graphs, which turn out to have small treewidth in practice (e.g., Thorup 1998). Data structures for shortest path queries can use tree decompositions in a preprocessing phase (e.g., Chatterjee, Ibsen-Jensen, and Pavlogiannis 2016). Graph theory can be guided by treewidth implementations when attempting to rigorously determine the treewidth of specific graph families (e.g., Kiyomi, Okamoto, and Otachi 2015). Finally, many problems in probabilistic inference use tree decompositions in a preprocessing phase (e.g., Otten, Ihler, Kask, and Dechter 2011).

While some treewidth implementations existed before PACE 2016, they were not easily accessible and sometimes buggy (as in the case of the Python SAGE implementation, which can produce non-optimal solutions), and their performances have never been compared in public. For PACE, we imposed a unified input/output format for the challenge and required all implementations to be made available on github. Moreover, the details and raw data of all results mentioned in this document can be found in the github repository [https://github.com/holgerdell/PACE-treewidth-testbed] that we published; using the tools and benchmark instances in the repository, it is a trivial matter to reproduce the results.

The list of all implementation submissions can be found here: https://github.com/holgerdell/PACE-treewidth-testbed/blob/master/pace2016-submissions.yaml

The goal of this challenge was to compute a tree decomposition of minimum width. Three teams participated in this track, and two PACE co-organizers contributed a further implementation. 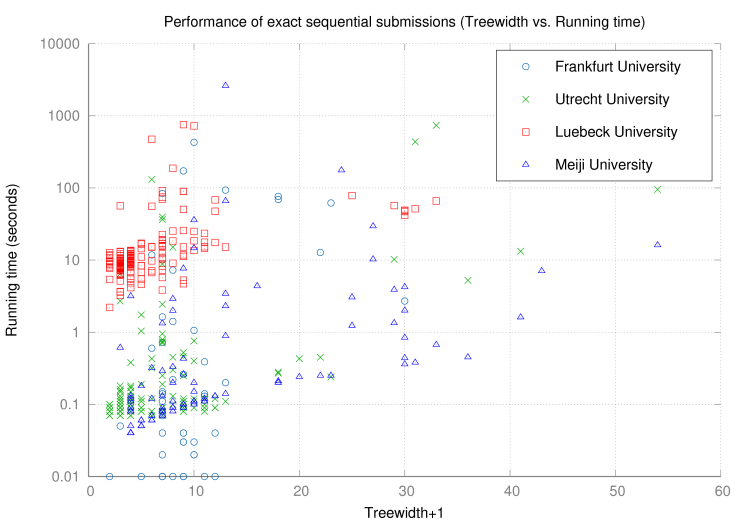 This plot shows one data point per solver-instance pair. The x-coordinate corresponds to the treewidth of the instance and the y-coordinate corresponds to the running time. We aborted the computation after a timeout of 100 seconds for most instances; some instances had a timeout of 1000 and 3600 seconds; in total, we used 200 instances in the exact competition. The instances are samples of named graphs, control flow graphs, and DIMACS graph coloring instances.

The goal of this challenge was to compute a good tree decomposition in a given fixed timeout. We set the timeout to 100 seconds for every instance. We used the 200 instances from the exact competition and 81 additional, harder instances from the same sources; arguably, the instances were generally too easy for the heuristic challenge. Seven teams participated in this track (9 sequential programs and 3 parallel programs were submitted). Some teams submitted multiple programs, in which case we only kept the best-performing submission of each team in the ranking.

This plot shows, for every sequential submission and every x, the number y of instances for which the submission computed a tree decomposition of width at most x. As can be seen, the top three submissions nearly converge on this metric; this is perhaps explained by the fact that all three implement the basic MinFill heuristic (tweaked in different ways). The other three submissions use more interesting techniques from FPT.

For the evaluation, we viewed each instance as a voter and determined its ranking for the implementations from the width of the tree decomposition produced by the implementation after 100 seconds. We combined these votes using the Schulze method. This process can be inspected in the testbed repository [https://github.com/holgerdell/PACE-treewidth-testbed/blob/github/logs/2016-08-13.02-08-25/ranks-he-se.txt].

In the Feedback Vertex Set problem we are given an undirected graph G and want to compute a smallest vertex set S such that removing S from G results in a forest, that is, a graph without any cycles. Feedback Vertex Set is NP-complete and one of the most prominent problems in parameterized algorithmics. Most fixed-parameter algorithms use the parameter solution size k=|S|.

We collected 230 graphs which were mostly from various application fields such as social networks, biological networks, road networks, incidence graphs of CNF-SAT formules. The graphs were selected so that there was a steady progression from easy to hard instances.

To determine the winners, we counted the number of instances that could be solved within the given time limit. To avoid overemphasizing low-level improvements of the algorithms, we set the time limit to 30 minutes per instance. To identify programs that report nonoptimal solutions we precomputed the optimal solutions for some instances using an ILP that was given at least 30 minutes on each instance. This ILP is based on cycle constraints. More precisely, we add constraints enforcing that for each cycle at least one vertex must be deleted by any solution. Since the number of constraints is usually exponential, they are added in a lazy fashion, that is, we compute a solution with only some initial constraints and check whether the solution is a feedback vertex set. If this is the case, then we have found an optimal solution, otherwise we add constraints for some of the remaining cycles and compute a new solution until a feedback vertex set is found.

In the following, we give for each team further details such as the number of solved instances, a brief algorithm description, the names of the participants, and a link to the code repository. The entries are sorted by place in descending order. All submissions apply a reduction rule that removes all vertices of degree at most two.